Seattle Police Chief Carmen Best holds a new conference in front of the East Precinct on Monday, June 29, 2020 after an early-morning shooting left one person dead and another injured in front of the station on 12th Avenue between East Pike Street and East Pine Street in Seattle. (Mike Siegel/The Seattle Times/TNS)

Seattle Police Chief Carmen Best holds a news conference in front of the East Precinct on Monday, June 29, 2020 after an early-morning shooting left one person dead and another injured in front of the station. (Mike Siegel/The Seattle Times/TNS) 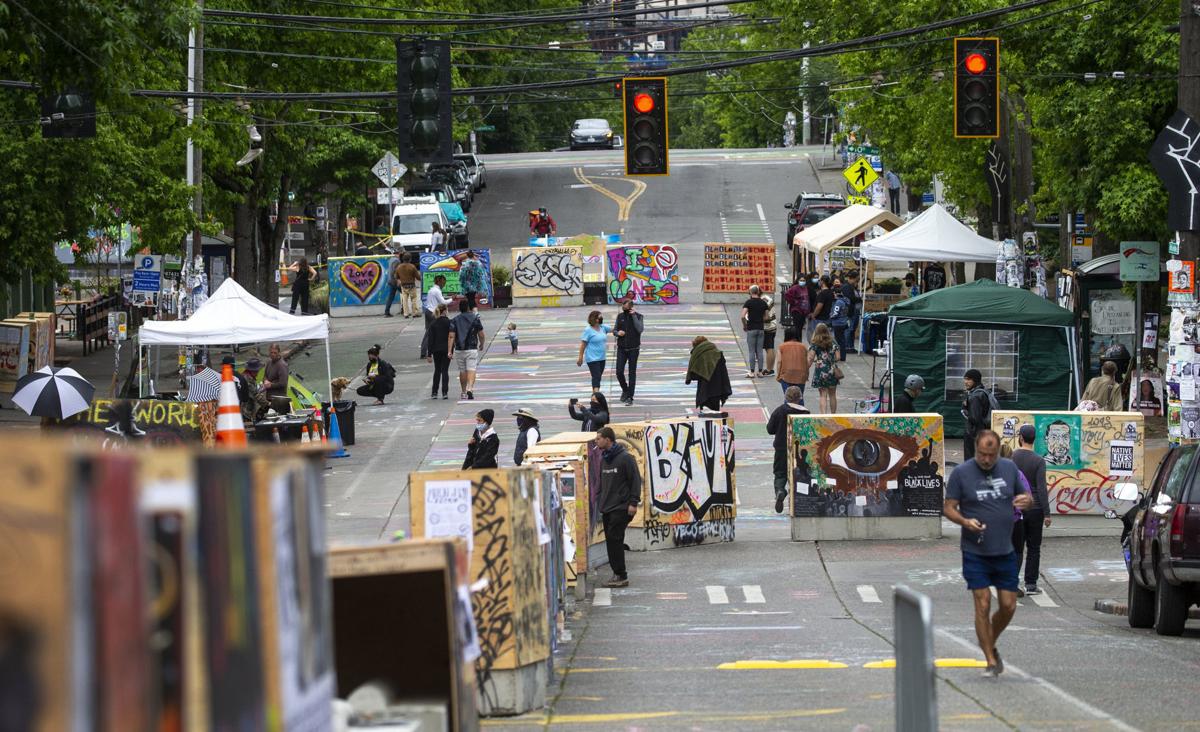 The CHOP, Capitol Hill Organized Protest, is quiet on Sunday morning, June 21, 2020. One person was killed and another was wounded early Monday morning, June 29, 2020 when they were shot in the protest area. (Bettina Hansen/Seattle Times/TNS)

Seattle Police Chief Carmen Best holds a new conference in front of the East Precinct on Monday, June 29, 2020 after an early-morning shooting left one person dead and another injured in front of the station on 12th Avenue between East Pike Street and East Pine Street in Seattle. (Mike Siegel/The Seattle Times/TNS)

Seattle Police Chief Carmen Best holds a news conference in front of the East Precinct on Monday, June 29, 2020 after an early-morning shooting left one person dead and another injured in front of the station. (Mike Siegel/The Seattle Times/TNS)

The CHOP, Capitol Hill Organized Protest, is quiet on Sunday morning, June 21, 2020. One person was killed and another was wounded early Monday morning, June 29, 2020 when they were shot in the protest area. (Bettina Hansen/Seattle Times/TNS)

SEATTLE - A 16-year-old boy was killed and a 14-year-old boy was wounded early Monday morning when they were shot at 12th Avenue and East Pike Street in the protest area known as CHOP, in Seattle's Capitol Hill neighborhood.

The shooting amplified calls to bring law enforcement back to the East Precinct and shut down CHOP, though protesters say the violence isn't connected to the movement and they won't leave until their demands are met. Monday's gun violence marked the second fatal shooting of a teenager in the area in a little over a week - Lorenzo Anderson, 19, died after being shot at the edge of the protest area in the early morning hours of June 20.

Monday's fatal shooting also raised concerns from protesters and Black clergy members alike about the city's response to the protest zone, with debates about what should be done next erupting later in the morning near the scene.

CHOP stands for Capitol Hill Organized Protest. Demonstrators have occupied several blocks around the Police Department's East Precinct and Cal Anderson Park for about three weeks, since the police left the precinct following standoffs and clashes with protesters calling for racial justice and an end to police brutality.

Harborview Medical Center spokesperson Susan Gregg said two people were brought in with gunshot wounds Monday morning, with one arriving in a private vehicle around 3:15 a.m. and the other brought in by Seattle Fire Department medics about 15 minutes later.

As of 5:40 a.m., one patient had died and the other was in critical condition, according to Gregg.

"Two African American men are dead, at a place where they claim to be working for Black Lives Matter. But they're gone, they're dead now," Best said, referring to Monday's slaying as well as the June 20 fatal shooting of Anderson. (Seattle police initially said the person who was killed Monday was an adult, but later corrected that to 16 years old).

"We need to be able to get back into the area," Best said about the protest zone and surrounding blocks, the scene of a total of four shootings in the past week and a half. "This is dangerous and unacceptable."

Regarding the latest shooting, police said the two teens were "presumably" the occupants of a white Jeep Cherokee SUV into which "several unidentified people" had fired shots. No suspects were in custody Monday.

"Detectives searched the Jeep for evidence, but it was clear the crime scene had been disturbed," police said on their blotter.

"Everyone who's not armed out here, I need them on the ground," a voice shouts.

Protesters in the area on Monday morning defended the occupation, saying it wasn't the cause of the violence.

"The bloodshed you're talking about has nothing to do with the movement," said Antwan Bolar, 43, who was staying in a tent in the protest zone. "That's people who would have been doing it in North Seattle or South Seattle anyways - it's just concentrated here."

Bolar said he heard multiple shots, and "would have thought it was fireworks if it wasn't the back-to-back pop-pop-pop."

David Lewis, who has been one of the organizers of the protests, thanked the Seattle Department of Transportation for leaving barriers up at the CHOP, saying that they had saved lives.

"I feel safer here than anywhere else," Lewis said.

Best argued against Lewis' and other protesters' assertions that the SDOT barriers protected people and prevented more from being hurt.

"I absolutely do not agree with that," Best said. "There are multiple people being injured and hurt and we need to do something about it."

She said police would like people to move out of the area.

"As an African American woman with uncles and brothers and stuff I wouldn't want them to be in this area," she said. "We've had two ... killed. We have a child that's injured from gun violence."

Tensions were still running high Monday morning: During Best's news conference, demonstrators down the street surrounded a pickup, shouting at Fox News correspondent Dan Springer, who was sitting in the passenger seat. The demonstrators said the dispute started when Springer pushed one of the protesters, Rashyla Levitt, who said she threw her coffee in Springer's face. Protesters also alleged that the driver of the truck pushed the vehicle into the crowd as the truck turned to leave the street.

Fox News said in a statement from vice president of domestic bureaus and Los Angeles bureau chief Nancy Harmeyer that a protester confronted Springer "after overhearing him cancel a live report due to 'filthy language' in the background," but "at no point during the situation did the FOX News crew ever physically instigate or retaliate in any way against the protestors."

By mid-morning, a silver SUV with what appeared to be blood smeared near the door had pulled up between East Pike and East Pine streets. Protesters said it was one of the vehicles used to transport one of the teenagers.

River, a protester who declined to give his last name, said the car was his. There had been a knife fight in Cal Anderson, River said, before he heard multiple gunshots in succession.

"I saw two young men lying on the ground," River said. "They were covered in blood. I had never seen anything like that."

River said he drove one of the victims to an ambulance outside the protest area, but as the car approached, the ambulance drove away. River said he and others got out of the car to chase down the ambulance before they got to a staging location and emergency responders took over.

"I was broken," River said.

The Seattle Fire Department said in an email with "preliminary information" that the ambulance crew perceived the car pursuing them "as a threat."

Seattle Fire Department spokesperson Kristin Tinsley said in an email that while two ambulances dispatched from Harborview Medical Center were on their way to a staging location outside the protest area they "encountered a Nissan Pathfinder driving erratically towards them with someone riding on top of the vehicle."

"The responding crew perceived this as a threat, and as this area had not yet been secured by SPD, attempted to drive away from the vehicle and continue on to the staging location," Tinsley said. "The crew was unaware during this time that this vehicle was carrying a patient."

When clergy members and Andre Taylor of Not This Time! arrived to speak to protesters and media members near the site of Monday's shooting, a visibly upset protester asked the Rev. Lawrence Willis, president of the United Black Christian Clergy, to pray over the vehicle that still bore bloodstains.

"Enough killing is enough," Willis prayed. "We have to stop this. In the name of Jesus, cover these young people. Because they're hurting, they're mad, they're upset. So Lord, do your work right now."

Willis said it was the city's responsibility to put an end to the "lawlessness" at CHOP. The pastor said he wanted police to return to the East Precinct.

"They're hurting, we're hurting. It's got to stop," Willis said. "(The city) needs to make a decision on how they're going to do it because that's what they get paid for.

"We have to do these funerals of these young men, and we're tired of it," he continued.

Demonstrators took issue with the message from clergy and Taylor, whose brother was killed by Seattle police in 2016. Protesters with bullhorns started chanting "Black lives matter" as Taylor and clergy members spoke.

"And yet they're still killing Black people," Lewis said.

"When I went up there to go see my son there, there was nobody there," Anderson said. "Only my family was there. Weren't no detectives there, wanting to ask questions ... It was like he was nobody."

Some Seattle City Council members rejected the idea Monday that the latest shootings at the CHOP were caused by the demonstration.

Councilmember Kshama Sawant said during a council briefing the shooting "highlights the urgency to address the endemic violence in our society under capitalism."

In 2019, SPD investigated three homicides on Capitol Hill, including two in Cal Anderson Park, according to Seattle Times data, though they were spread months apart. No homicides had occurred in the neighborhood in 2020 until Anderson's death.

Two people have died and four were injured in four separate shootings in and around the occupation area over the past week and a half, not including the June 7 shooting of Dan Gregory by a man who drove into protesters before CHOP was formed.

Council President M. Lorena Gonzalez agreed with Sawant that the shootings should not be attributed to the CHOP and, instead, blamed a nationwide gun violence crisis.

"There is a lot of reporting and information on social media that I think misses the point around what we are seeing manifest itself again (on Capitol Hill) and throughout the city," she said. "Gun violence is a public health epidemic across the country. Seattle is not an exception to the plague of gun violence within our communities and this is not being caused by a specific zone within our city."

The protest zone has also drawn the attention of President Donald Trump, who tweeted Monday morning that the protesters "have ZERO respect for Government."

Visit The Seattle Times at www.seattletimes.com

This article originally ran on seattletimes.com.