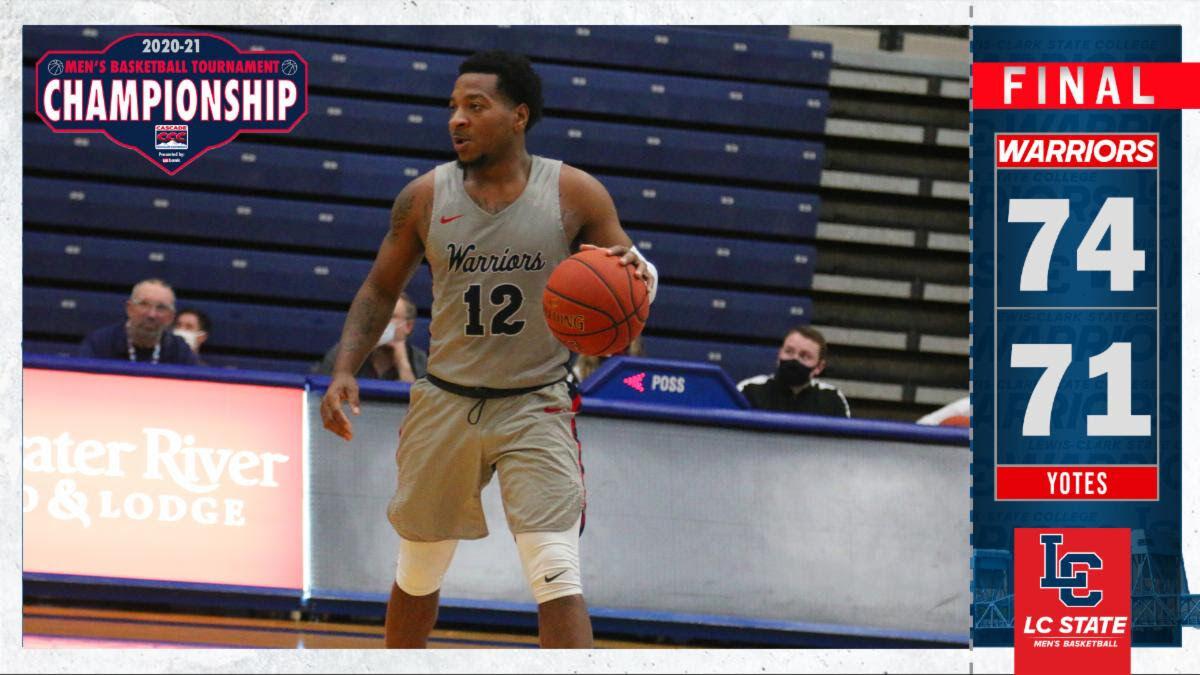 LEWISTON - Three free throws made the difference on Thursday night when No. 4 Lewis-Clark State Men’s Basketball held off a potent College of Idaho team in the Activity Center. Trailing 71-67 with 1:20 to play, LC State took advantage of costly Yote fouls and drained seven foul shots to make up the difference and earn the victory in Game 1 of the Cascade Conference Men’s Basketball Tournament Championship, presented by U.S. Bank.

“Our guys did a tremendous job of responding to adversity tonight,” Head Coach Austin Johnson said. “C of I is a national-tournament level team and they showed why tonight. It was a big-time matchup and environment with each team making plays.”

Damek Mitchell led all scorers with 19 points in the nail-biter, while Jake Albright and Trystan Bradley added 14.

“We weren’t at our best but we gave ourselves a chance late,” Johnson said. “Our seniors really powered through. Each of them had their fingerprints all over this game.”

The Warriors jumped out to a 9-4 lead early in the contest on a 3 from Hodges Bailey and six points from Mitchell. Back-to-back baskets by Bailey made it a 14-6 lead and LC led by 11 midway through the first half.

An 8-2 run by the Yotes brought them within two with three minutes to play, and C of I grabbed the lead with a minute to go. A 3-pointer by Mitchell in the last 40 seconds evened the score 33-33 and sent the teams to the locker room.

Buckets by Bradley and Bailey got the Warriors off to a strong start in the second half. C of I rallied to take a 41-37 advantage, but back-to-back baskets by Bradley and Bailey tied things 41-41 at 16:45. College of Idaho took off on a run to take a 49-41 lead two minutes later and held that lead until Oreon Courtney converted a steal into a basket at 10:47 to make it a 53-52 game.

The two traded baskets with the Yotes eventually pulling ahead by four, 71-67, with 2:11 on the clock. C of I ran into foul trouble in the last minute and sent LC State to the line four times that resulted in seven points. Foul shots by Mitchell gave the Warriors a two-point lead, and one from Albright made it 74-71.

Albright squashed any attempt to tie with a steal on the final C of I inbound.

“We had a nice spark from Oreon in the second half to give us some life,” Johnson said. “We will need to be a lot better on Sunday if we want a chance to win, so we’ll prepare and try to get our legs back.”

Mitchell led the game with 19 points and was a perfect 6-for-6 from the free throw line. Bradley added 14 points and tied for the team-high rebounds with Mitchell on six boards. Albright tallied 14 points and dished out a game-high seven assists.

LC State shot 46.4 percent from the field and forced 18 C of I turnovers. They had double the number of assists (18).

The Warriors hold a 1-0 lead in the best-of-three series against College of Idaho. Game 2 will be played Sunday at 4:00pm PT in Caldwell. If necessary, the Game 3 location will be determined by a coin flip.

The winner of the series will earn an automatic berth to the 48-team NAIA national tournament. Pairings and sites for the opening rounds for nationals will be announced on March 4.

Sunday’s Game 2 will be streamed by College of Idaho. Linked can be found on yoteathletics.com.

Cloudy with rain and snow showers early changing to mainly rain showers in the afternoon. High 43F. Winds WSW at 10 to 20 mph. Chance of rain 70%. Winds could occasionally gust over 40 mph.