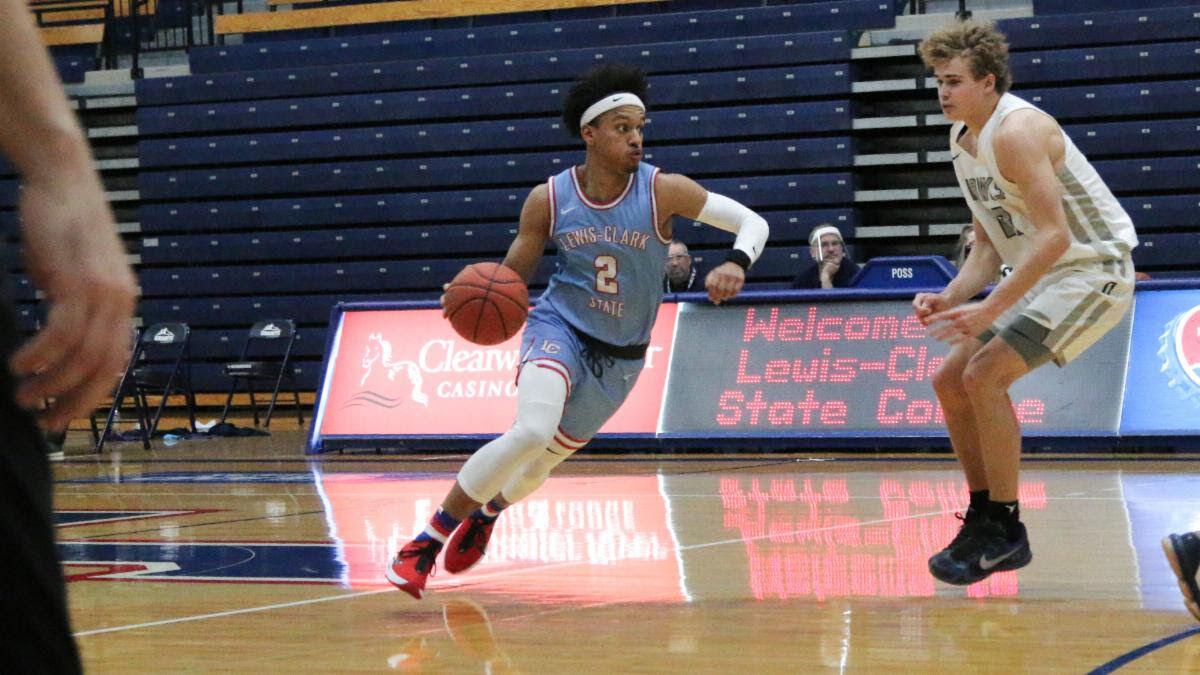 GLENDALE, AZ - It came down to the final seconds on Thursday when the No. 7 Lewis-Clark State Men's Basketball team dropped the first of two contests to the No. 5 Arizona Christian Firestorm by a final of 81-76. Khalil Stevenson put together a strong performance and led the Warriors with a career-high 19 points including five 3-pointers.

"I loved how our guys competed today in a postseason-level environment," Head Coach Austin Johnson said. "ACU is a very good team and they showed that tonight. Ultimately, we had too many defensive breakdowns late and didn't finish inside offensively to the level we needed to win. We will have to recover quick and we are back at it tomorrow."

The Firestorm opened the game with eight straight points before Damek Mitchell cut the run with a 3-pointer on an assist from Trystan Bradley. A pair of 3s from Khalil Stevenson cut the ACU lead to one before another triple from Bradley gave LC State a 12-10 advantage at 14:56.

Mitchell, Bradley and Stevenson all hit 3-pointers, and a three-point play by Albright made it 24-14 LCSC at 9:18. The Firestorm rallied to even the score 28-28. Oreon Courtney threw down a dunk to give the Warriors a 32-30 lead, but a 3 by ACU put the Firestorm back in front.

Bradley dropped the eighth 3-pointer of the half for the Warriors to put LC State ahead 35-33 with two minutes to go. A pass from Stevenson set Courtney up for his third dunk of the half to give LC a 37-35 lead at the half.

At the half, Stevenson led the Warriors with 11 points, and Bradley had nine. LC State totaled eight 3-pointers in the first 20 minutes and shot 53.8 percent from the floor.

Bradley started the second half with a layup after grabbing his own offensive rebound, and ACU answered with a 3. Stevenson responded with the ninth triple of the game, and layups from Albright and Hodges Bailey gave LC a five-point cushion at 16:15.

A layup by Mitchell gave the Warriors a 49-44 advantage five minutes in, and a 3 by Stevenson kept LC State in front by a small margin.

ACU pulled ahead by three midway through the half, and grew its lead to 67-58 by 5:30. A shot from behind the arc by Mitchell kept the Warriors within 10, but the Firestorm offense continued to charge on.

Back-to-back 3-point baskets by Mitchell cut the deficit to 73-67 with three to play, and Bradley hit another to pull LC within three, but the Warriors couldn't overcome the Firestorm and fell 81-76.

Stevenson led the Warriors with a career-high 19 points, Bradley added 18, Mitchell had 17 and Courtney scored 10. Both Stevenson and Mitchell drained five 3-pointers. Courtney went 5-for-5 from the field and Bradley was 4-for-5 from 3-point range.

Albright led the effort at the boards with seven rebounds, while Stevenson grabbed six. Mitchell dished out six assists.

The two top-10 teams face off again tomorrow at Arizona Christian at 2:00pm PT. The game can be streamed online using the link on lcwarriors.com.

Spring post-op: Who can join JoJo Domann as mainstays in the Huskers' OLB group?

Laird wins SEC Freshman of the Week for fourth time

Partly cloudy this morning, then becoming cloudy during the afternoon. High 78F. Winds NNE at 5 to 10 mph.

Some clouds this evening will give way to mainly clear skies overnight. Low near 50F. Winds light and variable.