PULLMAN - "The termination of Washington State football coach Nick Rolovich on Monday was unjust and unlawful," says a statement released Wednesday morning from Rolovich's attorney Brian Fahling.  The statement says Rolovich is planning a lawsuit against Washington State University and others.

Rolovich was terminated on Monday for not complying with a vaccine mandate for all state employees in Washington state. "It came after Coach Rolovich’s request for a religious exemption from the vaccine was denied by the University. The institution also indicated that even if the exemption had been granted, no accommodation would have been made. As a result, Coach Rolovich will be taking legal action against Washington State University, and all parties responsible for his illegal termination," says the statement.

Fahling says immediately after terminating Coach Rolovich, WSU Athletic Director, Pat Chun, directed campus police to escort the coach to his car, he wasn’t allowed into his office, and he was allowed to speak to his team. "Since at least early April, it became clear that Chun had already determined that Coach Rolovich would be fired. Chun’s animus towards Coach Rolovich’s sincerely held religious beliefs, and Chun’s dishonesty at the expense of Coach Rolovich during the past year is damning and will be thoroughly detailed in litigation," says Fahling's statement.

"Chun’s discriminatory and vindicative behavior has caused immeasurable harm to Coach Rolovich and his family. Furthermore, the University’s deceitfulness about being unable to accommodate Coach Rolovich even if his religious exemption request had been granted, is exemplified by Chun’s actions arranging a “secret” donor trip that he had Coach Rolovich attend at the height of the pandemic in July 2020. During that excursion, Chun and other attendees contracted the disease, but Coach Rolovich did not," reads the statement. "It is a tragic and damning commentary on our culture, and more specifically, on Chun, that Coach Rolovich has been derided, demonized, and ultimately fired from his job, merely for being devout in his Catholic faith."

The full statement, provided by Fahling to Big Country News on Wednesday morning, is attached to this story. 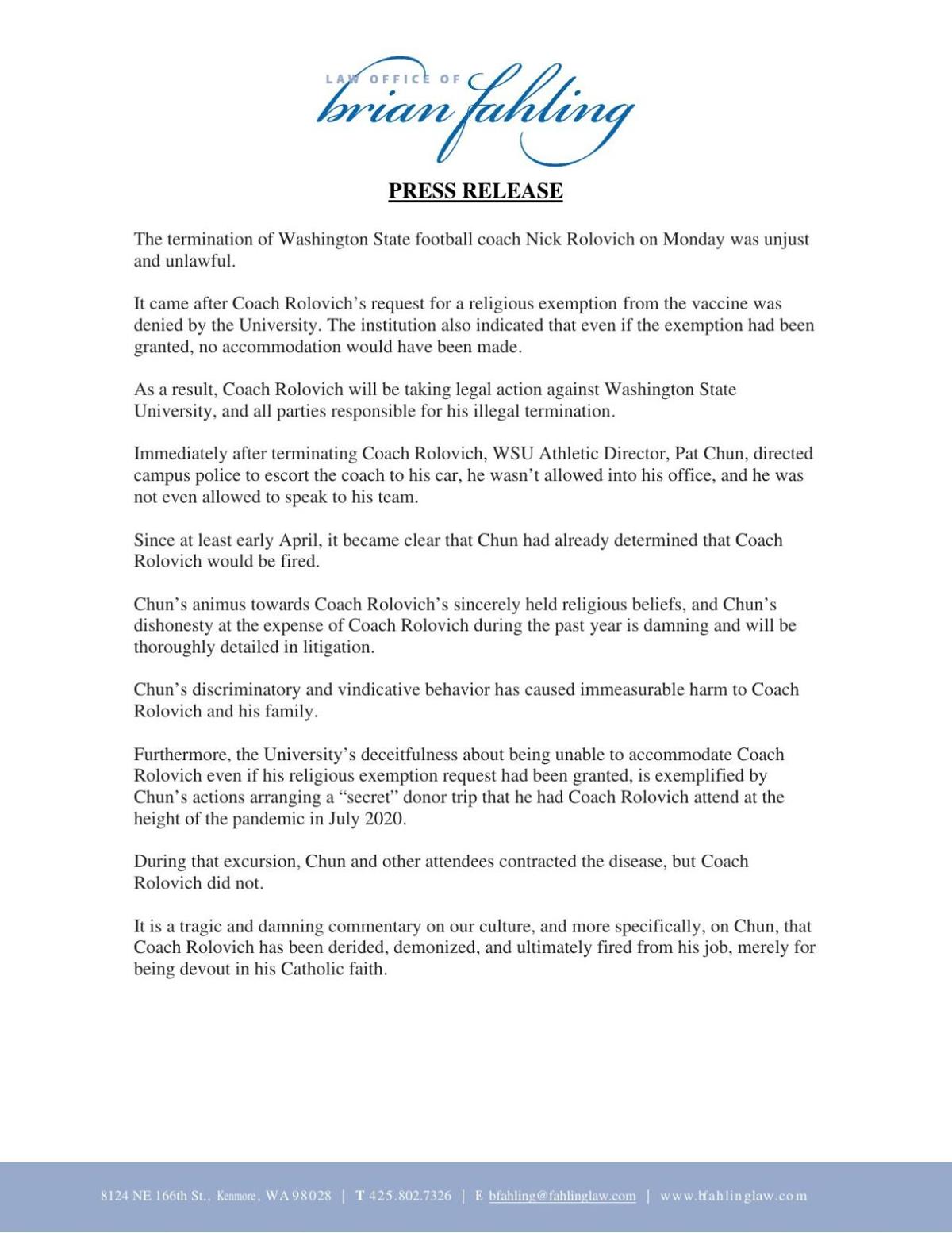