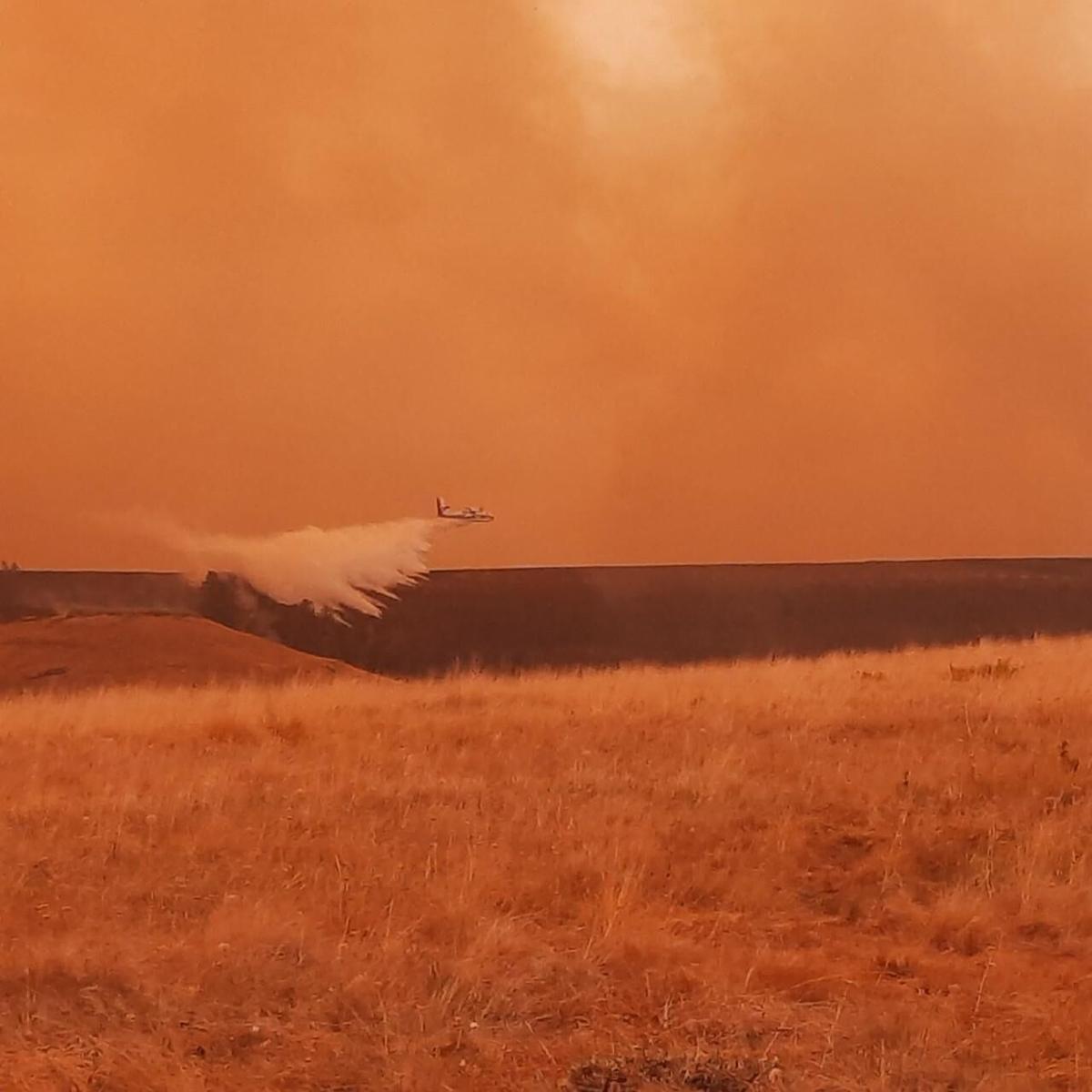 Aerial treatment on Harlow Ridge by a fixed-wing aircraft assigned to the Lick Creek Fire July 13, 2021. 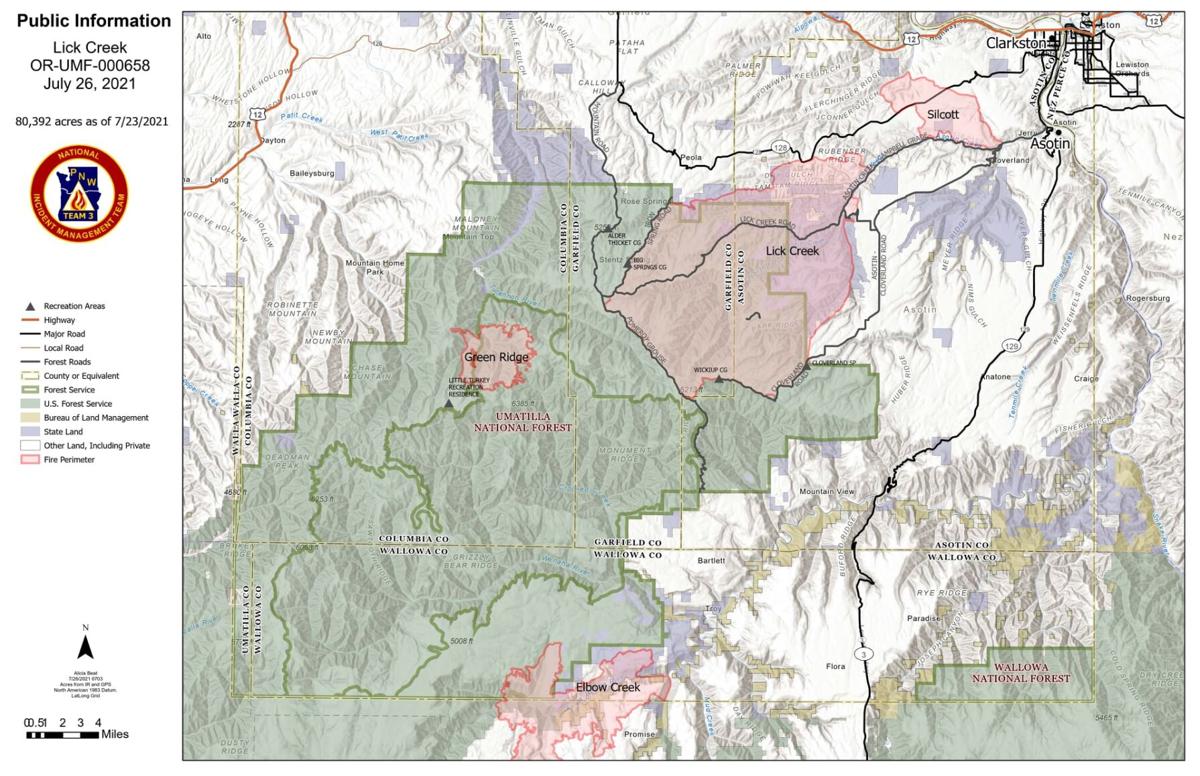 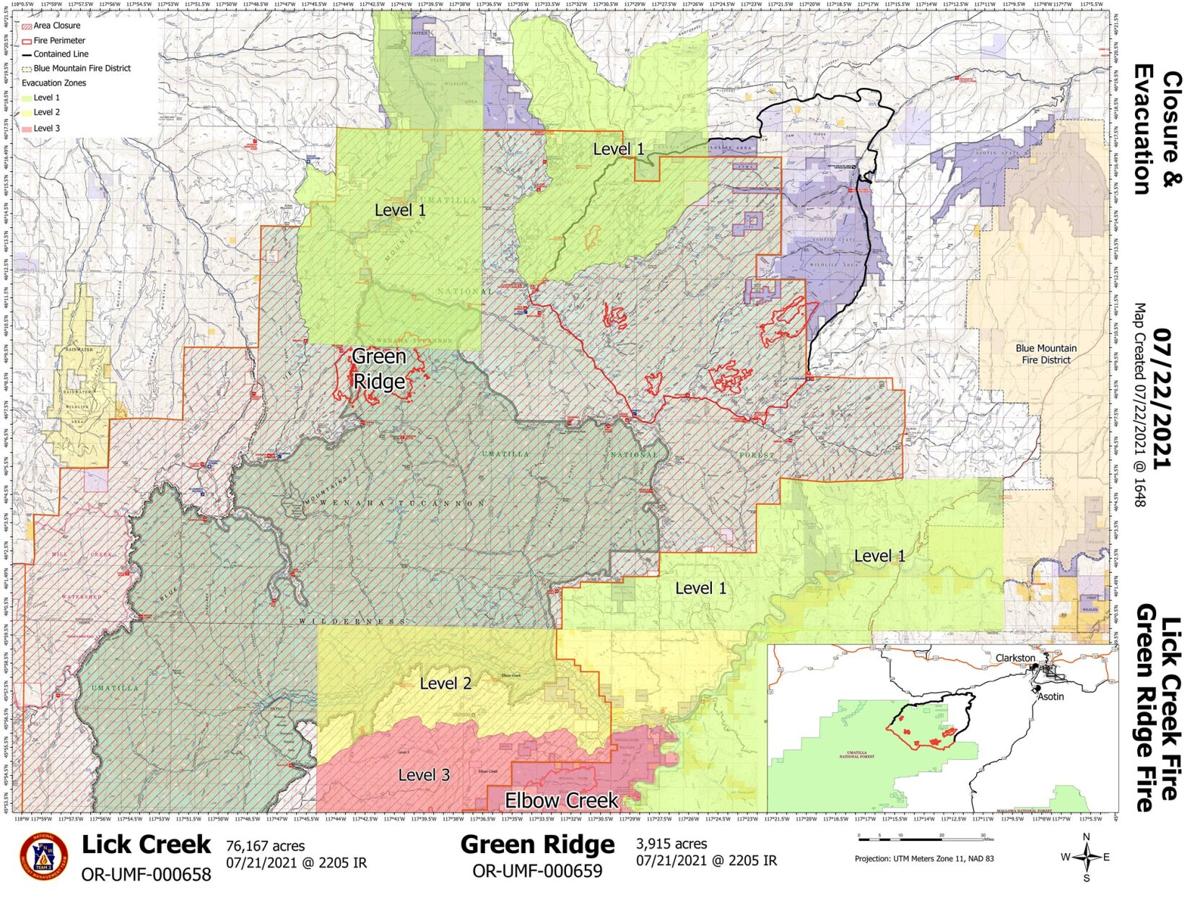 POMEROY - According to an update from fire officials on Monday morning, July 26, containment on the Lick Creek Fire southwest of Clarkston remains 90%. On Sunday, fire growth was stagnant for the second consecutive day, with the fire last estimated at 80,392 acres.

Meanwhile the Green Ridge Fire was last estimated at 6,799 acres with 15% containment. This fire grew by approximately 900 acres on Sunday.

Smoke will continue to be visible as unburned pockets of vegetation inside the fire area are consumed. A small spot fire approximately 100 feet from the southern perimeter was contained by crews that are monitoring and patrolling the fire.

The Green Ridge Fire, located 30 miles east of Walla Walla, was last estimated at 6,799 acres and is 15% contained.

Preparation of roads on the north, west and south of the fire for burnout operations is ongoing. Handline from the 030 Road northwest to Panjab and north from Panjab to Meadow Creek has been completed. From Meadow Creek to the northwest, handline and hose lays are in place connecting to the 4022 road where mechanical line preparation has tied into the southern side of the Lick Creek Fire.

A wildland fire module will continue to work along the northern portion of the fire inside the Wilderness boundary. Crews will be finishing structure assessment and protection measures to the south near Godman Guard Station and to the north near Tucannon. Structure assessment and protection will also take place on the east side of the Wenaha-Tucannon Wilderness in the Grouse flats area. These crews will also be available for Initial attack of any new fires in the local area. A combination of hand and aerial ignition may be used to accomplish the burnout operations along prepared roads to the south and west of the fire as conditions allow.

The Pacific Northwest Team 3 will be shadowed by California Team 12 today in preparation of transferring command of the fire at 6:00pm tonight. After transition occurs, the Command Post will be established in Dayton, Washington.

“On behalf of our entire team I’d like to extend a heartfelt thank you to the communities of Asotin, Columbia and Garfield counties for their cooperation and outstanding support while we were here,” said Randy Johnson, Incident Commander for Pacific Northwest Team 3.

Mostly sunny in the morning, increasing clouds through the day. The combination of clouds and smoke will bring the potential for a few degrees of cooling, otherwise it will be another warm day across the fire. Smoke Information is available on the Washington Smoke Blog at: https://wasmoke.blogspot.com/

All Forest Service lands, roads, and trails within the Umatilla National Forest are closed.

Cloudy skies early, then partly cloudy in the afternoon. High 62F. Winds WSW at 5 to 10 mph.