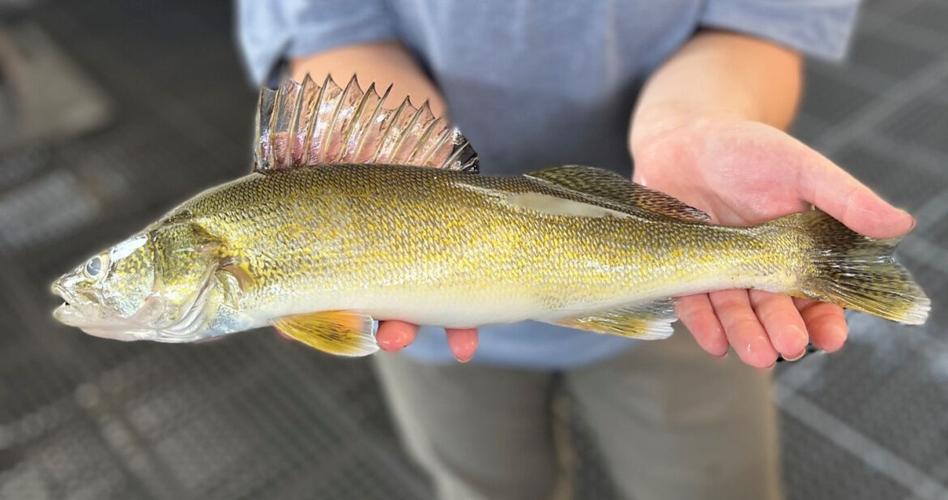 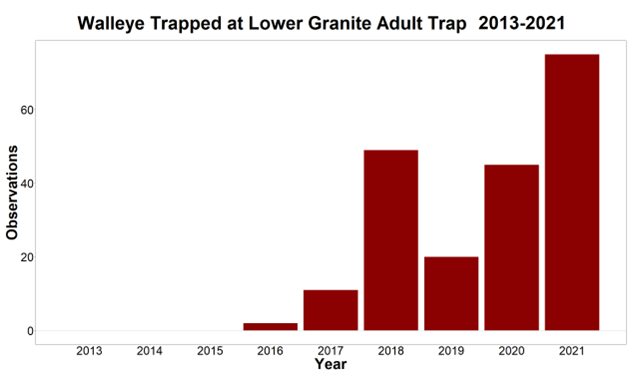 LEWISTON - Walleye have spread throughout the Columbia River basin following an unauthorized introduction to Lake Roosevelt in the mid-20th century. These fish have remained downstream of Idaho’s salmon and steelhead rivers until recently. Data collected at the Lower Granite Dam adult fish trap has shown that walleye have been moving through the fish ladder and likely passing over this dam since at least 2016 (2016=2; 2017=11; 2018=49; 2019=20; 2020=45; 2021=75).

The adult fish trap is located halfway up the fish ladder and allows biologists to trap and handle a portion of fish moving through the ladder. Because the adult trap collects only a portion of fish moving up the ladder, the numbers represent a fraction of what has actually passed upstream of the dam over the last handful of years. Fish and Game estimates that 160 walleye in 2020 and 294 in 2021 passed over Lower Granite Dam, and passage in 2022 is shaping up to be the largest yet. Additionally, anglers are encountering walleye in Idaho’s anadromous waters with increasing frequency, including one fish caught over 80 miles up the Salmon River near Riggins.

Walleye are effective and opportunistic predators that will prey on emigrating salmon and steelhead smolts. Juvenile salmonids in Idaho rivers and streams are already affected through predation by native and non-native birds and fishes, and as more walleye continue to move and colonize upstream of Lower Granite, predation rates will continue to rise. Researchers downriver have estimated that the average walleye eats around 2.5 smolts per day in the spring (McMichael and James 2017), and that non-native predators, including walleye, might be eating up to 17% of certain populations of juvenile emigrants (Harnish et al. 2014). This scale of mortality can reduce adult returns.

Angling encounters with walleye will only increase as more of these fish pass above Lower Granite, so it might be time to brush up on your walleye identification skills. Generally speaking, walleye have a dark green back, that transitions into a gold side, and a light white belly. The walleye is closely related to the yellow perch, but lacks the dark vertical bars that you would see on the side of a perch. Walleye have a long and slender shape with a tapered head, somewhat similar to the overall shape of a northern pikeminnow. However, these two species can easily be differentiated by remembering just a couple of key characteristics. Walleye have two distinct dorsal fins (the first fin has spiny rays and the second has soft rays), while northern pikeminnow only have a single, soft-rayed dorsal fin. Additionally, walleye have sharp and obvious teeth, while northern pikeminnow have no teeth (don’t try to grab a walleye by the lip!). If you have any questions about identifying walleye and other species in Idaho, consult pages 58-61 of the 2022-2024 IDFG fishing regulations.

Within Idaho’s anadromous waters (Clearwater River, Salmon River, and the Snake River below Hells Canyon) there are no restrictions on the daily bag, size, or possession limit of walleye. The average walleye that we’ve sampled from the ladder at Lower Granite over the last few years has been almost 18 inches and just under two pounds, with the largest fish coming in at 23 inches and four and a half pounds. Fish and Game officials say if you happen to find one at the end of your line, you are encouraged to keep it and enjoy it as a meal.

Idaho Wolf Board, Fish and Game to collar more wolves

Topgolf Boise to open on Monday

Rain. Low 37F. Winds light and variable. Chance of rain 100%. Rainfall near a quarter of an inch.

Rain. Low 37F. Winds light and variable. Chance of rain 100%. Rainfall near a quarter of an inch.